DigiCad 3D is an excellent tool for dealing with images, drawings, photographs of building, regular or irregular surfaces and maps. It operates either directly on raster images or by digitization. It is used in aerial and architectural photogrammetry, cartography, and mapping, for which it offers powerful, easy-to-use and exclusive instruments.

Based on four or five fixed points of reference, you can operate directly on the image or on elements drawn on the image.
In the first instance, you obtain a new image without perspective distortion and to scale. In the second case, if the original image is digitized, the Dynamic Attach feature allows you to view both the digitized drawing and the straightened drawing on screen at the same time. So you have total control and increased flexibility – you can check the accuracy of your data as you work.

Based on four or five fixed points of reference, you can operate directly on the image or on elements drawn on the image.

In the first instance, you obtain a new image without perspective distortion and to scale. In the second case, if the original image is digitized, the Dynamic Attach feature allows you to view both the digitized drawing and the straightened drawing on screen at the same time. So you have total control and increased flexibility – you can check the accuracy of your data as you work. 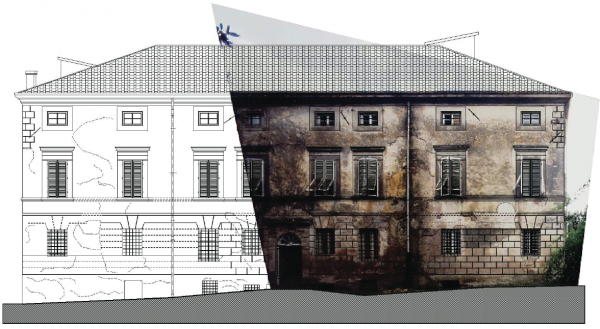 It is possible to transform just a part of an image, delimited by a polygon, drawn either on the original image or where it is to be transformed. This function, along with the new possibilities for transparency described below, enables you to select relevant details from the original images or photos – construction details, decoration, frescoes, special materials, damaged elements, etc. 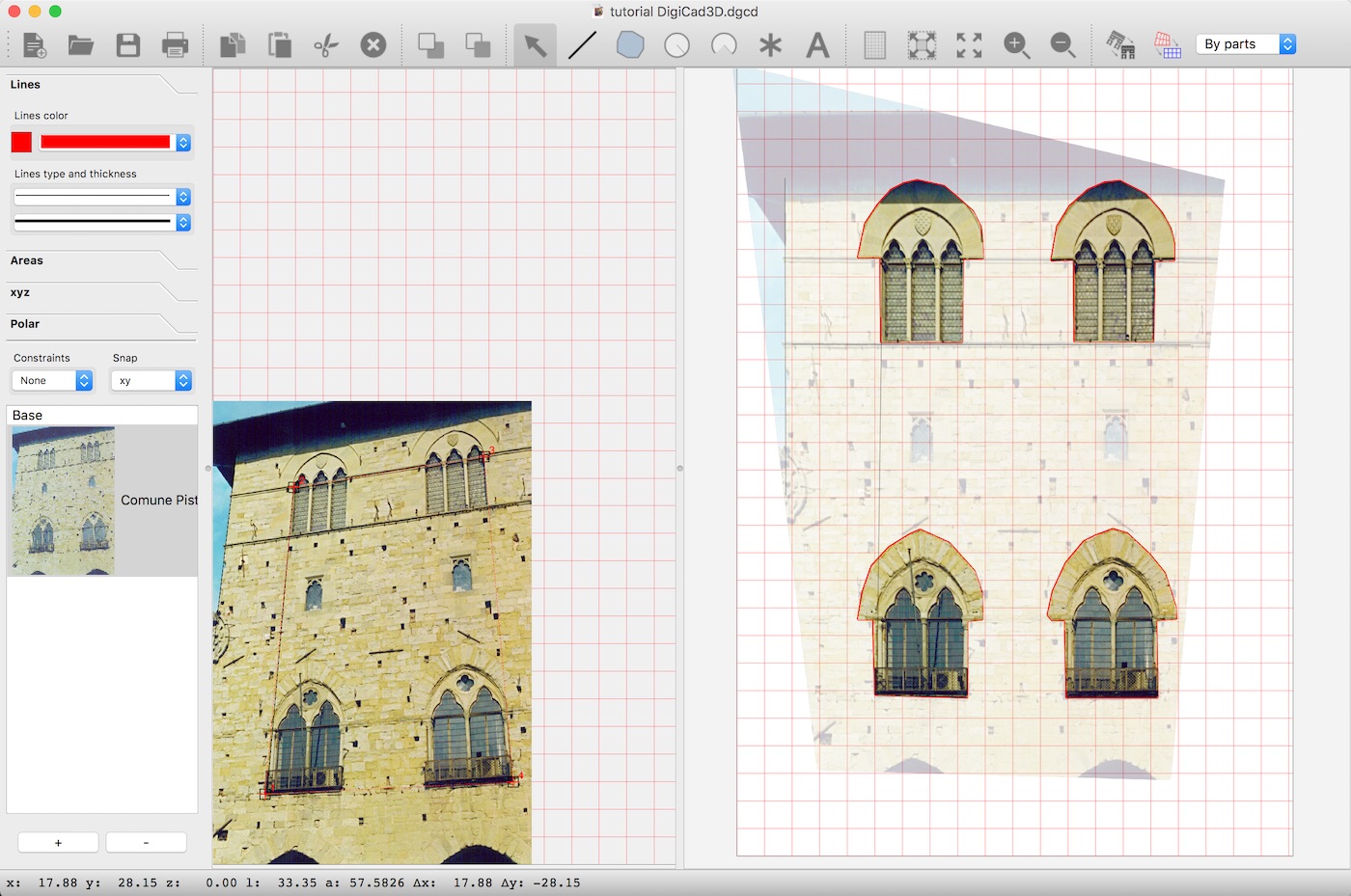 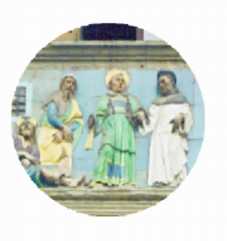 Transformed image delimited by any shape

Resulting images can be transparent or opaque. A transparent image can be superimposed on drawings or other images and is totally see-through. For example, you could superimpose a particular construction detail over a technical drawing or one map over another. An opaque image obviously covers whatever is beneath it. 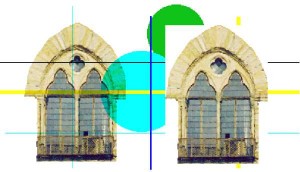 Mosaic work is easy with DigiCad 3D. You can join confining or superimposed images such as construction details within a building facade, or two maps scanned to different scales. The accuracy of the mosaic is guaranteed by the common origin of the fixed measurements, by the transparency of the images and by their delimitation.
DigiCad 3D can also join a number of images with missing parts.

Even without precise or detailed measurements, it is possible to make an attempt at transformation, using those elements held to be vertical or horizontal.

Until now, photogrammetry programs using just one photo have been limited to straightening up flat surfaces only.

DigiCad 3D has broken that barrier!  It allows you to straighten up curved or irregular images.

Buildings like the Coliseum in Rome, or the Leaning Tower of Pisa, the Capitol Hill in Washington or the Casa Mila of Gaudì in Barcelona? No problem for DigiCad 3D!

Straightening up is achieved using a mesh or grid, regular or irregular, which is then superimposed on the irregular image, with fixed reference lines or points.
With the same method an aerial photo can be exactly superimposed to a map. 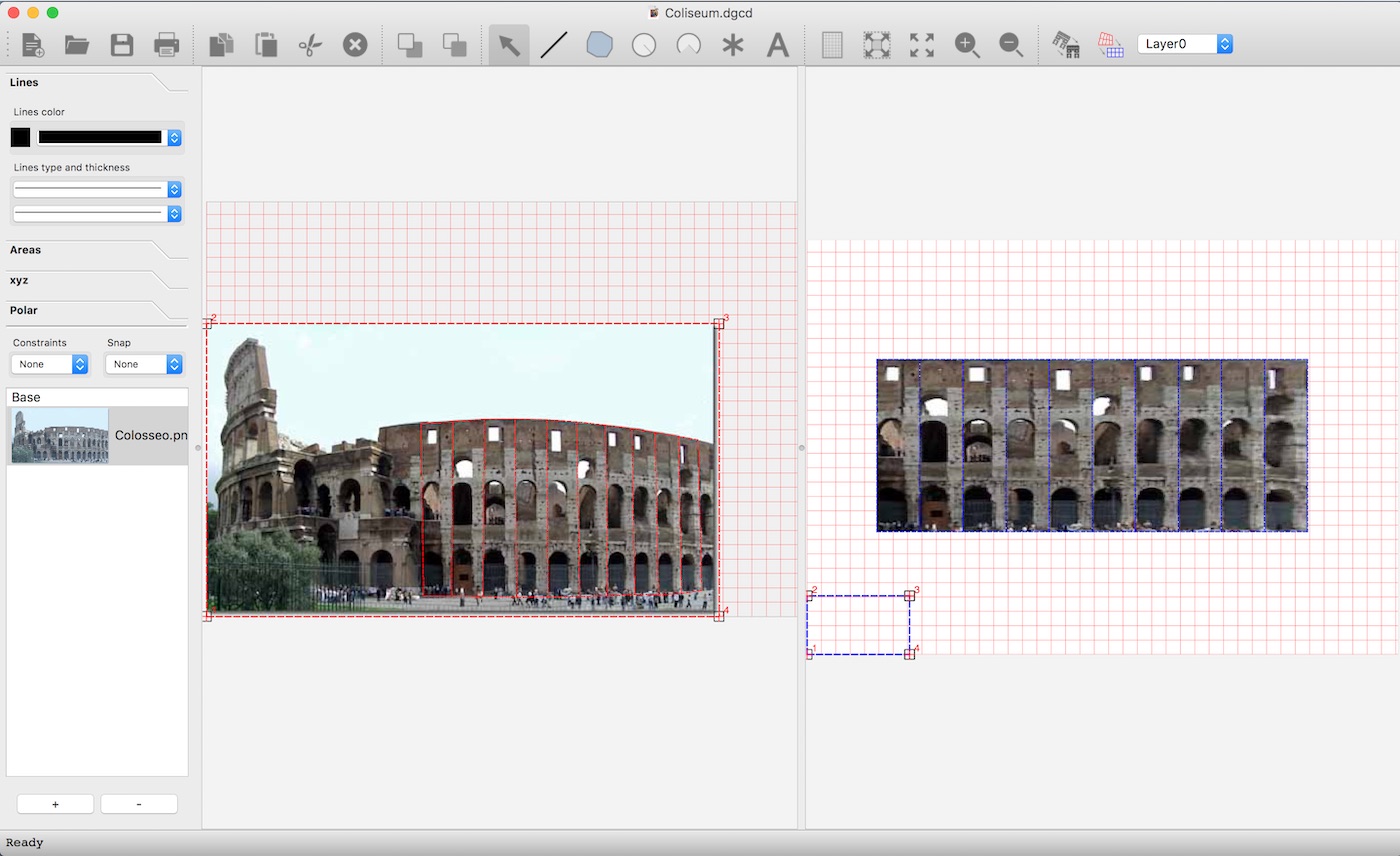 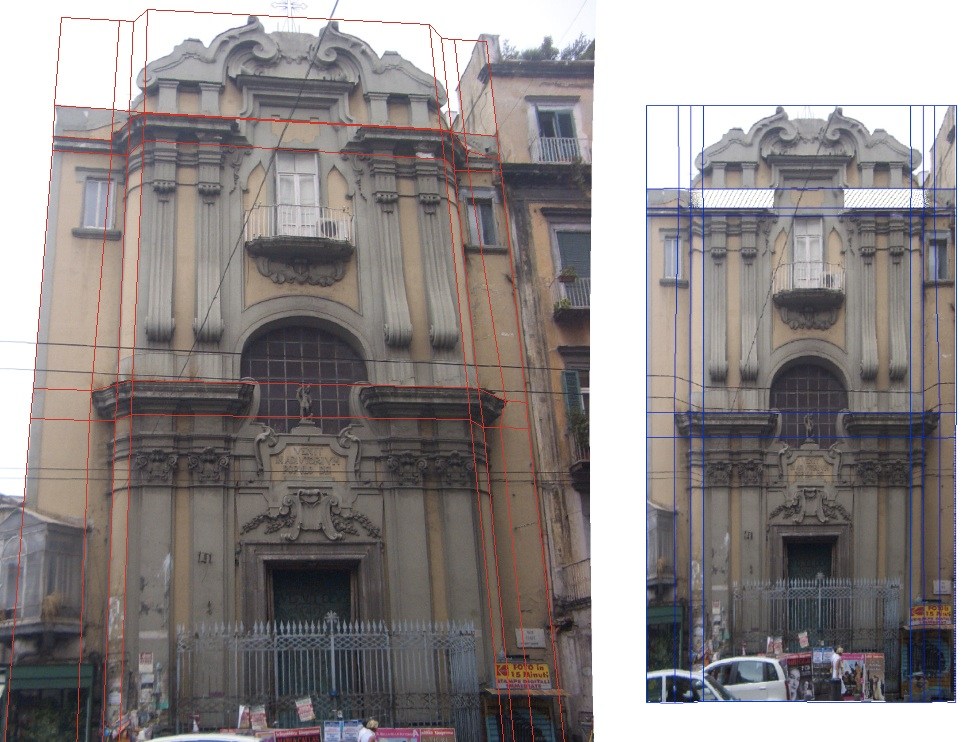 Straightening of a complex facade

Wide-angle, or other special lenses can cause serious optical deformation to images; straight lines can become curves and a flat surface can take on the familiar ‘barrel’ or ‘cushion’ appearance.
DigiCad 3D offers a much faster method, based on an algorithm which deals quickly with the common types of optical deformation  in wide-angle and zoom images.

It allows you – for several different lenses – to  manage correction data, file it and retrieve it from by a menu.

Mesh system is still available in the new version.  Indeed it is the best way of correcting irregular optical deformation. 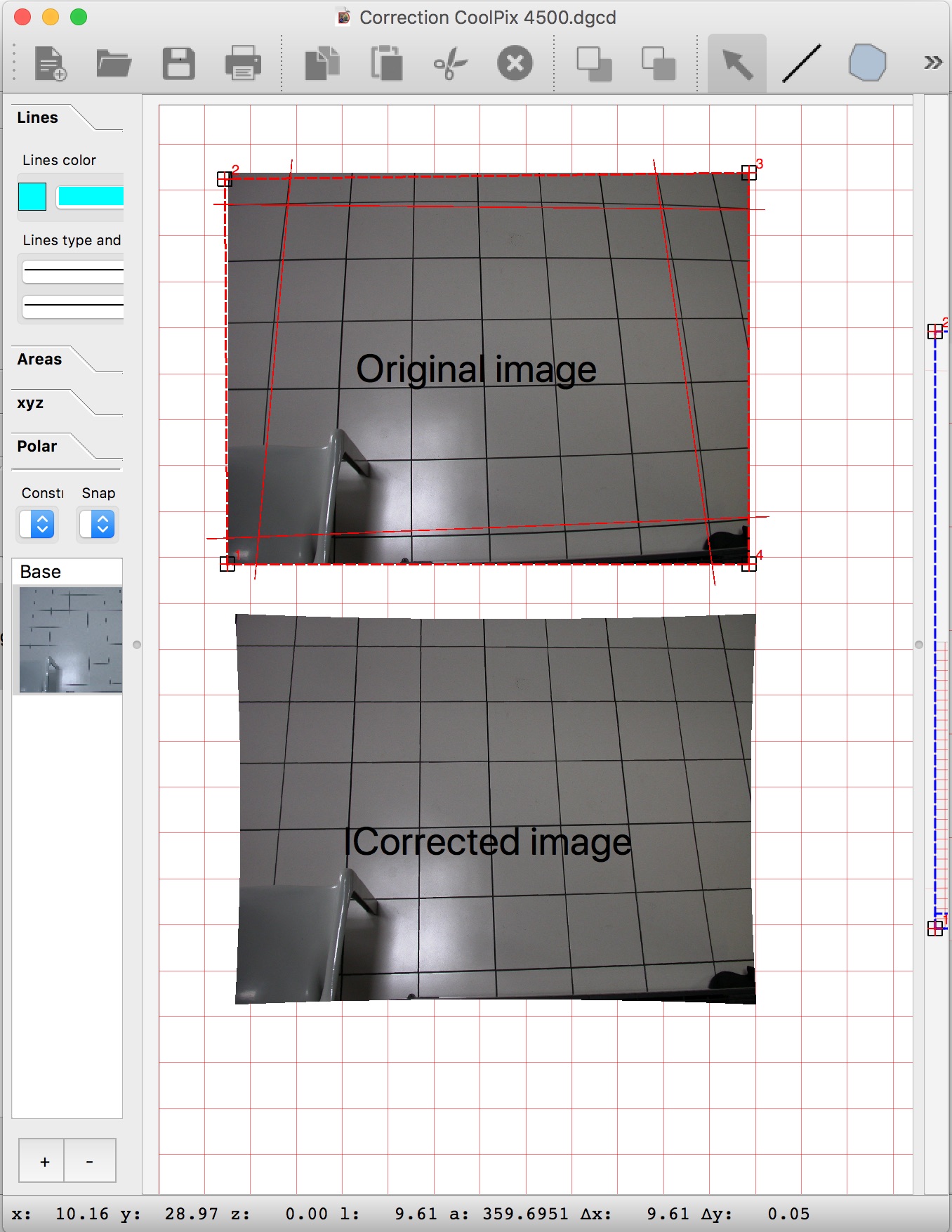 Correction and georeferencing of maps

As with images, so maps can have perspective distortion eliminated , removing distortions on the support material or errors in copying, scanning and printing. DigiCad 3D allows one to work on maps joining and superimposing raster and vectorial maps and to define any kind of mapping coordinate references.

Use of satellite images

Google Maps are composed of series of blocks at various scales of representation of known dimensions.
Map2Cad queries the Google Maps database directly and extracts the original piece in order to correctly import it into DigiCad 3D.

Here is an example of the use of a satellite map superimposed on a cadastral map to identify the position of new buildings. 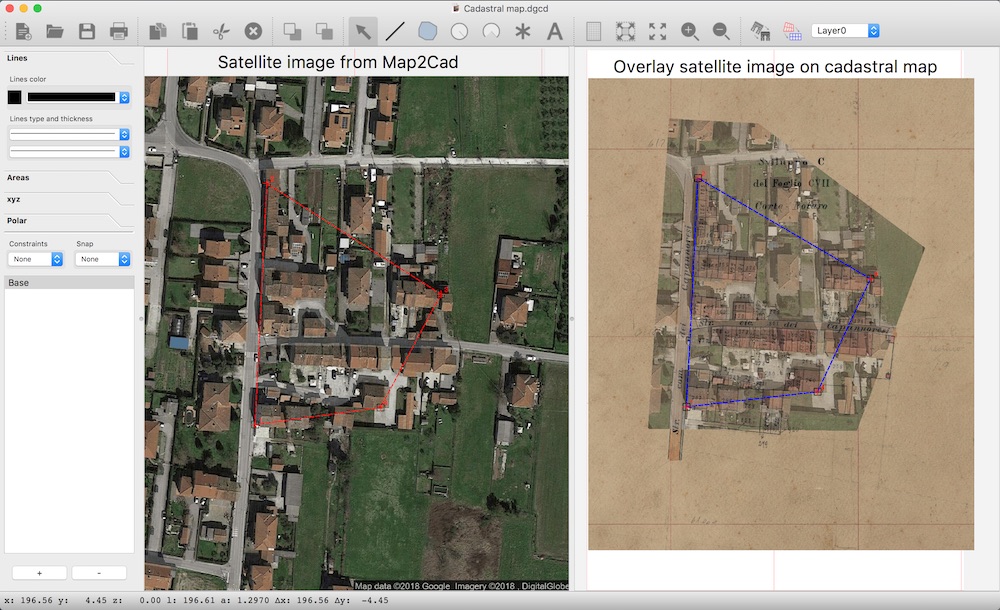 DIGICAD 3D is the ideal tool for creating textures from photos of facades or construction details, decorations, paintings and even whole facades for use on simplified 3D models. Textures selected for use on 3D elements with a rendering program must be completely flat.

DIGICAD 3D has extremely flexible procedures for importing and exporting, which make it compatible with all other programs.
The digitized drawing or transformed image can be transferred to other applications using cut-and-paste, filed in GIF, JPEG, TIF, PICT, BTM, 3D DXF or DWG, ASCII XYZ, PDF and others graphic formats.
You can import documents in XYZ-ASCII format and drawings in DWG, DXF, CXF, BTM, JPG, PNG and many others.

DigiCad 3D allows you to import and manage point clouds through the Clouds2Cad function.

Usage is similar to Map2Cad, with a catalog of images previously created with Clouds2Cad.

Clouds2Cad allows you to access the point cloud management panel, which allows the following operations: 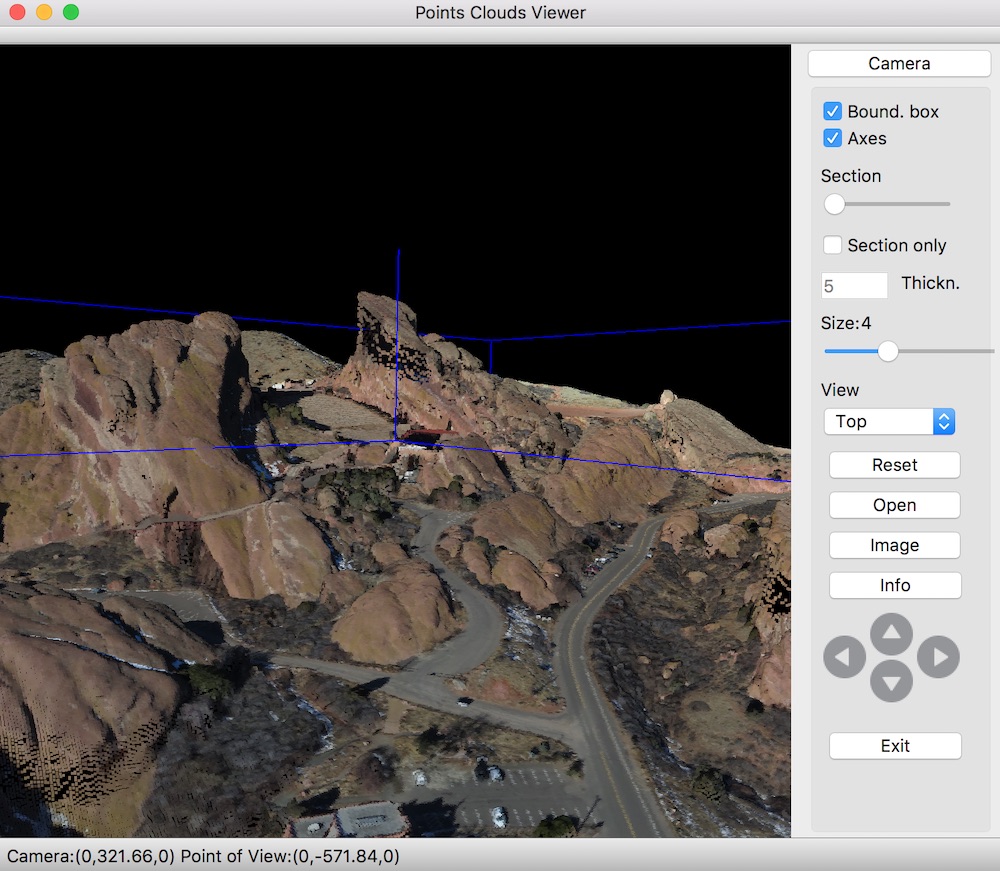 The old maps are available from scans of the original maps, which contain a series of errors due to the deformation of the maps over time.Using the mesh allows you to recalibrate the map exactly with the following steps:

Setting the correct scales in Graphic parameters, corresponding to the imported map
Adding the map in the Origin view
Creating a mesh with the number of rows and columns based on the part of the map to be corrected and dimensions equal to the distance of the parametrization of the paper.
Move the vertices of the origin mesh with the mouse, making them exactly correspond to the intersections of the grid of the paper parametrization
The target mesh already has the correct dimensions. Eventually it can be moved to the position of the sheet where to obtain the result
Execute the Transform with mesh command, with the choice of the linear deformation

Here is an example of calibrating a part of the map. 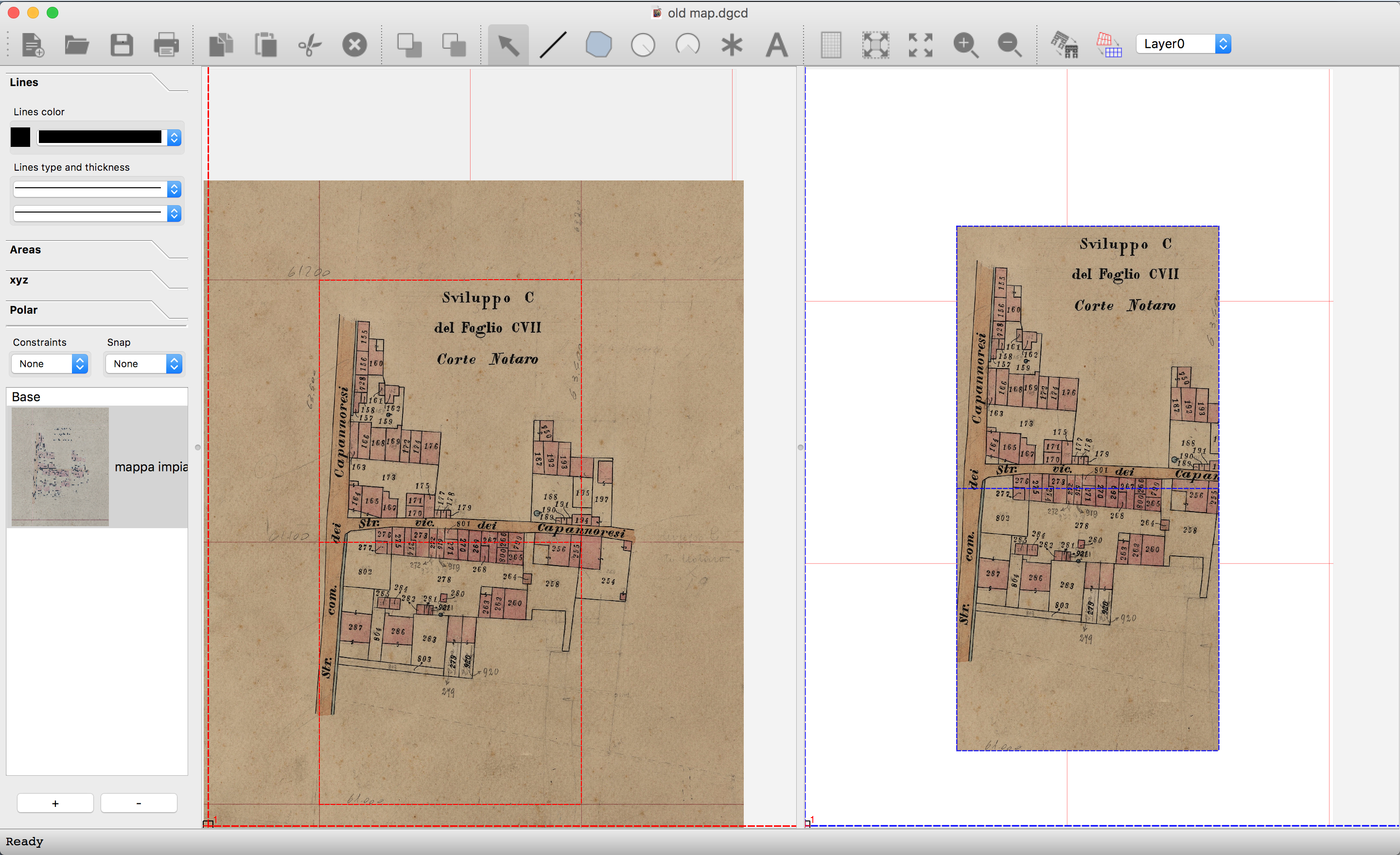 Automatic extraction of the contours of the images with control of the threshold value. 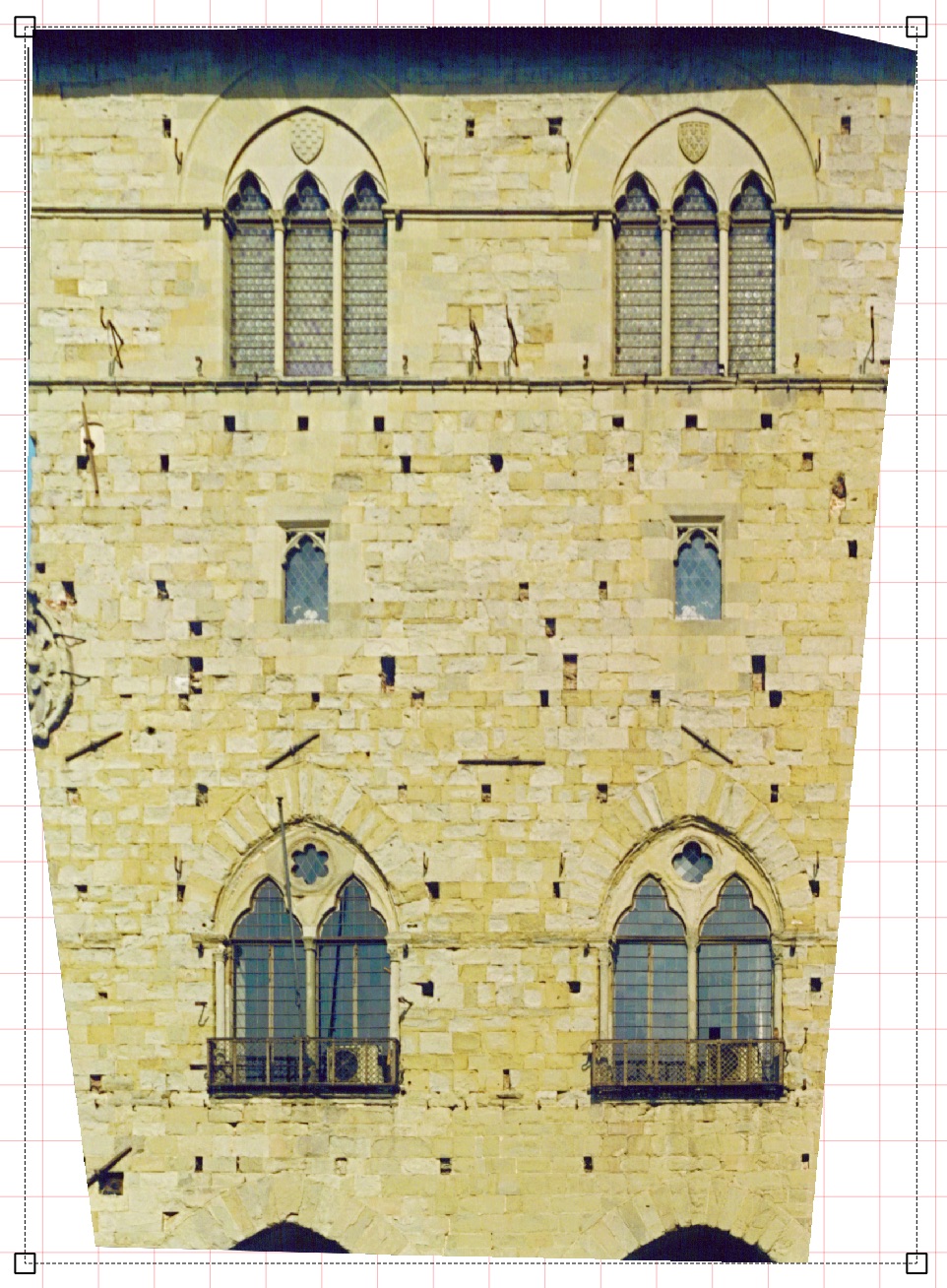 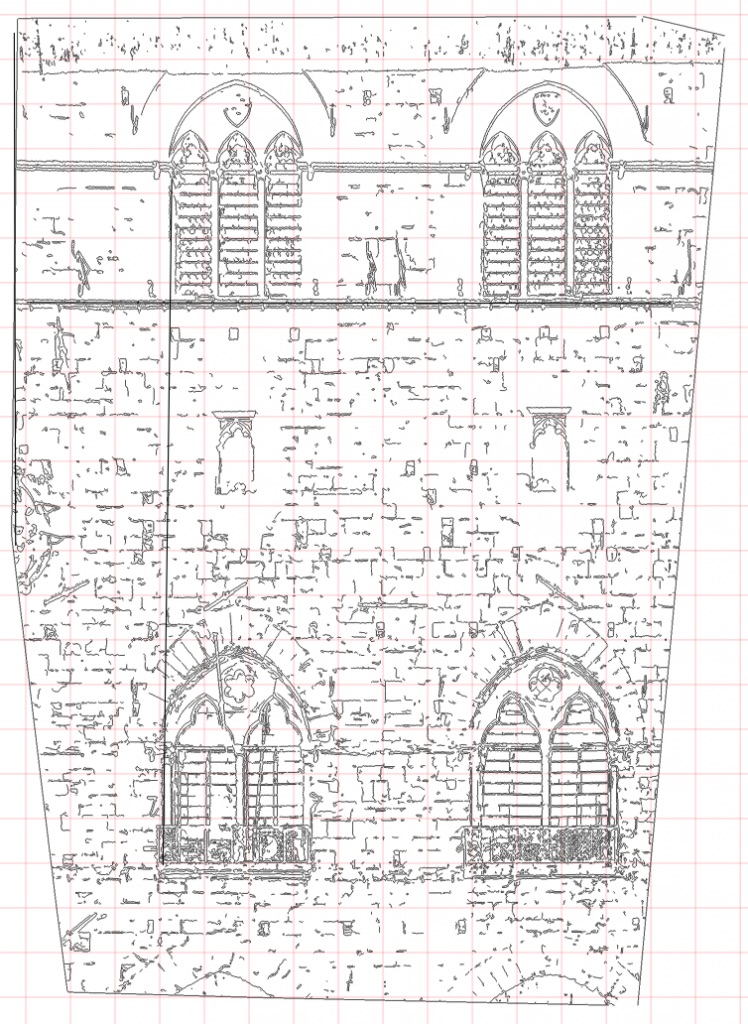 Drawing deformations can be corrected using separate coefficients for the x and y axes.